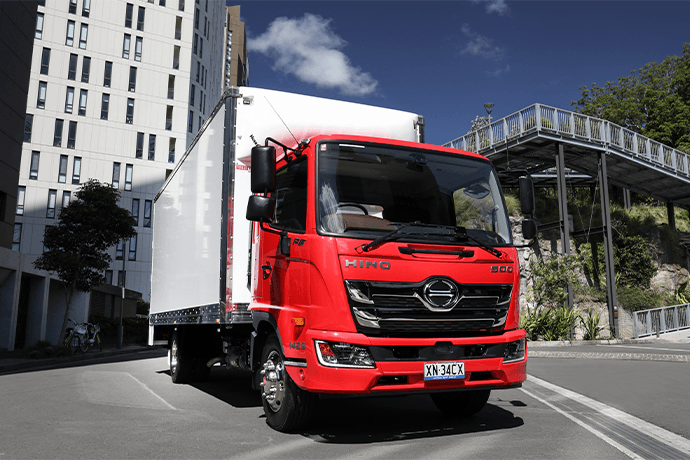 Currently available in dealerships around the country now, the all-new 500 Series Standard Cab offers Australian buyers the most comprehensive active safety package available from a Japanese manufacturer in the medium duty market.

There is also the Vehicle Stability Control (VSC) function which incorporates Anti-Lock Braking System (ABS) and traction control, another first for a Japanese brand in the medium duty market.

“The new 500 Series Standard Cab is significant both for ourselves and the market here, as it sets new benchmarks for the medium duty sector not only in safety but also in comfort, technology, operational efficiency and its green credentials,” said Bill Gillespie, General Manager of Brand and Franchise Development for Hino Australia

“The interest at dealerships has been very strong so far, and we’re confident that the range, which stretches to 54 different specifications, will create a great deal of attention at the Show.

“Visitors to our stand will also go in the draw to win a fantastic unforgettable ‘money-can’t-buy’ experience, the details of which we’re keeping a surprise until the show. It should be a lot of fun.”

Australia’s premier truck industry and public exhibition, the biennial Brisbane Truck Show will be staged once again at the Brisbane Convention and Exhibition Centre from 16 – 19 May.

Hino will also display its 500 Series Wide Cab, which set new benchmarks when it was introduced in 2017 with safety features such as VSC and reverse camera as standard.

The 300 Series 817 4x4 remains the safest Japanese truck in its class and is the only 7500kg GVM 4x4 truck in Australia with VSC, driver and passenger airbags, cruise control and reversing camera as standard features.

The 700 Series heavy duty range will be represented by a SH 2045 which tows the Hino Sports Deck display trailer, a popular attraction at the Virgin Australia Supercars Championship.

2019 is the first year of Hino Australia’s three-year extension of its Supercar sponsorship.